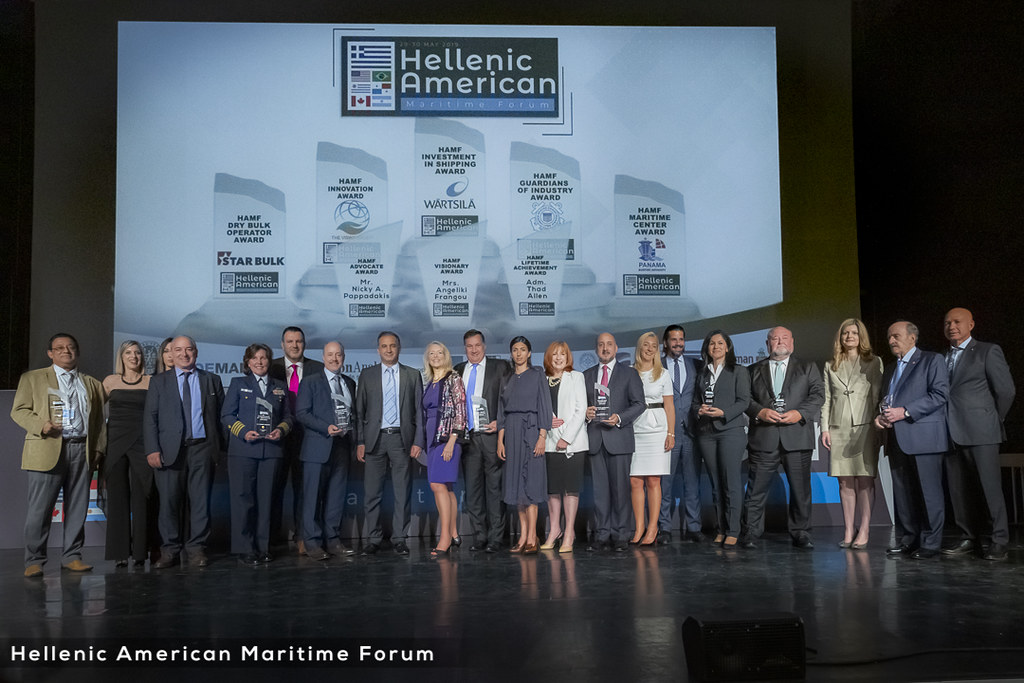 The winners of the 2019 Hellenic American Maritime Awards are:

Wärtsilä received the Hellenic American Maritime Investment in Shipping Award, sponsored by SHIPPINGInsight, for making significant investments in research, product, development and production for the shipping industry. Wärtsilä is one of the marine industry’s leading equipment suppliers with years of experience and technology know-how. The organization is also a global leader in smart technologies and complete lifecycle solutions for the marine and energy markets. Wärtsilä has set the development of efficient vessels, environmental solutions and gas technology as a key priority in meeting the evolving needs of the whole industry and its customers.

Star Bulk Carriers Corp received the Hellenic American Maritime Dry Bulk Operator Award, sponsored by Bureau Veritas, for demonstrating operational excellence in dry bulk shipping. Star Bulk is a global shipping company, having a fleet of 111 modern vessels with an average age of less than 8 years and a total capacity of more than 12.6 million deadweight. Star Bulk’s vessels transport major bulks which include iron ore, coal and grain, and minor bulks such as bauxite, fertilizers and steel products. Every year, Star Bulk ships more than 37 million metric tons of cargo across the world; safely, efficiently and with care to the environment.

USCG received the Hellenic American Maritime Guardians of Industry Award, sponsored by ABS, award for its valuable contribution to ensuring enhanced safety at sea. USCG carries out three basic roles – maritime safety, maritime security and maritime stewardship – and is lauded for its quick responsiveness in a broad range of emergencies. USCG maintains an extensive fleet of 243 coastal and ocean-going patrol ships, tenders, tugs and icebreakers called “cutters”, and 1,650 smaller boats, as well as an extensive aviation division. According to statistics, on an average day, the USGC will conduct 109 SAR, save 10 lives and assist 192 people in distress.

Mr. Nicky A. Pappadakis received the Hellenic American Maritime Advocate Award, sponsored by Cayman Islands Ship Registry for promoting best practices within the industry when being past Chairman of Intercargo. Born in a traditional shipping family with its roots on the Aegean island of Kasos, Nicky Pappadakis began his career within the family firm of A. G. Pappadakis & Co. in 1961. Mr. Pappadakis himself served periods at sea as an apprentice on tankers and dry cargo vessels, while he was also qualified as an airplane and helicopter pilot. He was one of the first western shipowners to see the potential of China as a business partner and a builder of vessels, and he has maintained close relations with China ever since.

Adm. Thad Allen received the Hellenic American Maritime Lifetime Achievement Award, sponsored by The American P&I Club, for his outstanding career in the shipping industry. Admiral Thad Allen served as the 23rd Commandant of the Coast Guard from 2006 to 2010. He is now a U.S. Coast Guard retired and has recently joined HudsonAnalytix as a Senior Executive Advisor. His focus areas include regulatory and policy issues, crisis response and disaster management, environmental compliance, and cyber risk to shipping, ports, and supply chains. Adm. Allen was the lead federal official for the responses to Hurricanes Katrina and Rita and served as National Incident Commander for the Deepwater Horizon oil spill.